History and baseball are intertwined at Citizens Bank Park in Philadelphia. Whenever a Phillies’ player hits a home run or the game is won, the iconic Liberty Bell swings and chimes. But getting fans excited with this experience was a bit of a struggle in recent years, as the bell’s hydraulic control system was older and outdated and not running as it should. There was often a question of whether the bell would swing and chime as expected when it was set in operation. 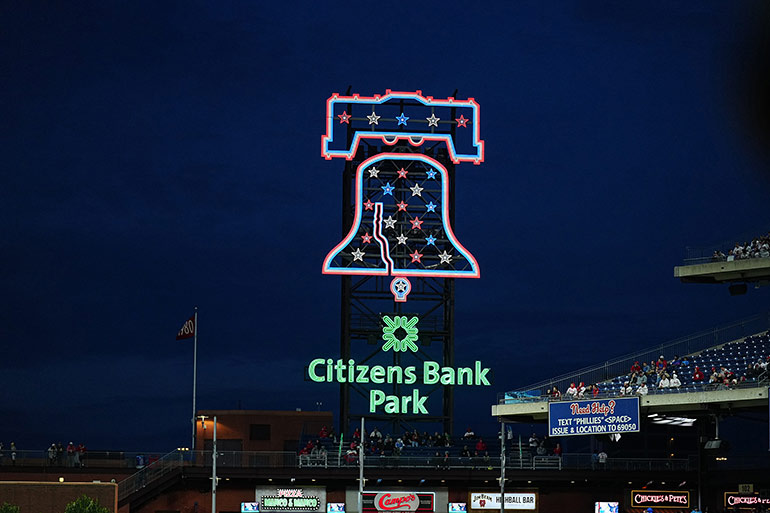 Whenever a Philadelphia Phillies’ player hits a home run or the game is won, the iconic Liberty Bell swings and chimes. But last season, it was determined the hydraulics and controls for the Bell needed an overhaul. Image The Phillies/Miles Kennedy

A group of about a dozen limit switches were designed to know the position of the bell, so that when it was turned on, a limit switch would know to stop and go back and swing backwards, said Andrew Roach, Project Manager for Ballpark Renovations.

“Birds would sit on the limit switches, believe it or not. And, then, they would get knocked out of whack and then the bell really didn’t know where its current position was,” Roach said. “Then, it would think it was at the end, so it wouldn’t move, or it would be stopped in the middle and then it wouldn’t move when we would hit the button.” 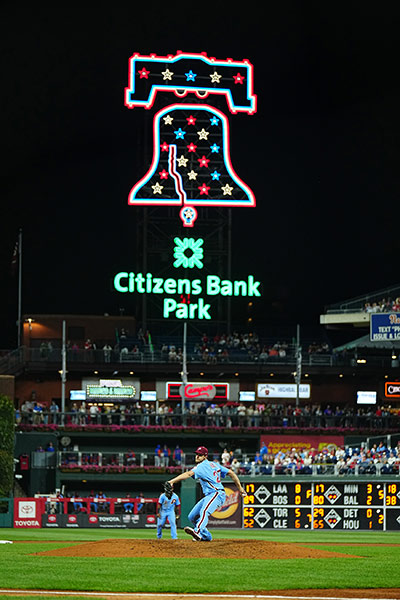 After working with Turner Hydraulics/TASCorp. and the köllab group, the Phillies’ Liberty Bell swings and chimes better than it has ever done, with modernized lighting and controls. Image courtesy of The Phillies/Miles Kennedy

So, as the season wrapped up in 2021, Roach’s team reached out to Tyler Kicera, of köllab group, who is an expert in designing kinetic motion systems for entertainment purposes, to assess the situation and determine what steps should be taken to revamp the bell’s control system.

“We didn’t deviate too far from the original. In my mind I wanted to figure out how we could build in some additional range of motion in terms of speed and functionality. The main method of how the Liberty Bell moves is through hydraulics,” Kicera said. “Looking at that system, it had been upgraded and different pieces and parts added onto over the years. It was sort of cobbled together. And, obviously, from my time in the entertainment industry, I knew what was possible from that perspective and how to clean it up and make it more efficient and sort of just bring it up to the current technology.

“So that was ultimately the driving force — to restore the speed and range of motion, as well as just making it something that was bulletproof and was going to work when they hit the Go button.”

It was soon realized that the current company that was charged with maintaining the hydraulics system would not be able to update the system as Kicera envisioned. So, he reached out to Turner Hydraulics because he had worked extensively with them in the past.

“Hydraulics in general, can be very agricultural and that’s not what we needed here. We needed something that was more intelligent and had a higher level of functionality. And, that was something I knew from working with Turner in the entertainment industry, that they knew how to approach those types of problems.”

Dan Turner, owner and President of Turner Hydraulics/TASCorp., of Carlisle, Pa., was excited by the challenge. Between both companies of Turner Hydraulics and TASCorp. as well as his in-house fabrication shop, they were able to limit the number of people involved to streamline design and build. The HPU enclosure required additional fabrication and Turner was able to work directly with the crane company to coordinate lifting the unit up the nearly 90-ft tall bell tower. The hydraulic power unit from the Bell’s control tower, before being rebuilt by Tuner Hydraulics. Image Turner Hydraulics/TASCorp.

“With the original hydraulics, I was a little surprised that it almost appeared to be products that were installed right at the end of their current lifespan, if that makes sense. I think these products probably went into an obsolete mode within just a few years of being installed, which makes it difficult. So, we knew that we wanted to pick items that were going to be common items around for a long time,” Turner said.

Turner said the proportional valves were about 20 years old and outdated, so the team went up and did a diagnosis of the system. They studied flow rate and pressures required to move the bell and the bell clapper.

“We were able to determine that the pressure and flow rates were at a level that allowed us to reduce from a 30-hp electric motor down to a 20-hp electric motor. And the valves were selected based on the flow rates for the motion that was being requested,” Turner said. “From the way the bell was working the last couple of years, it’s now operating about twice as fast as it had been, even with the lower horsepower.

“So, what we found was a very inefficient hydraulic system, and it probably got that way over the many years of using outdated components. Admittedly, being 85 feet in the air is not conducive or  the most convenient for doing the hydraulic maintenance,” Turner added.

After watching countless hours of videos of the bell in operation over the years as well as just bells in general, the team had a very tight window to turn around the project. Turner’s team removed the old unit and brought it to the shop to reconstruct the enclosure and system.

“The issue with the old bell was that there was no feedback. So you would hit, ‘Start moving.’ And the bell wouldn’t move and you would just be like, ‘Did it not get the signal? Did it get the signal and just decide not to move for some reason?’ So there was no two-way communication,” Roach said. “Now up in the control room on the wall, we have a screen that shows the current status of the bell. If we restart the HPU and reboot the computer, that shows that there’s communication back and forth between the two systems; between our touch screen on the wall, and the bell itself, and the hydraulics. So it just gives us a lot more info on what’s going on up there,” Roach concluded. The rebuilt hydraulic power unit was more compact, as it eliminated a heat exchanger and featured a smaller motor and a new hydraulic pump, among other things. Image courtesy of Turner Hydraulics/TASCorp..

The Turner team got to work fast, focusing first on the position sensing of the system. Limit switches were able to tell when the bell was to the left and when it was to the right. They also had a slow down left, slow down right, and a center position limit switch.

“The limit switches seemed to be as much a problem as anything on the system and made it difficult to troubleshoot and get their finger on what was happening at which point,” Turner said. “And so, what we did, we took off the limit switches. We put on a linear encoder, like an LVDT. And, therefore, we were able to tell the bell’s position no matter where it was at. With the limit switches, you didn’t know where the bell was until it tripped one of the limit switches.

“And the clapper had very much the same system of limit switches. So, on the tower, there were probably 10 different limits switches which we removed, and then we put on just two of the LVDTs, one for the bell and one for the clapper.”

The HPU itself was also redesigned to be more compact and lightweight. By reducing the size of the motor and eliminating a heat exchanger, they eliminated extra points of failure, Turner said. The pump was changed from a vane pump to a HPVR pressure-compensated piston pump from Continental. And finally, the Turner/TASCorp. team remanufactured the enclosure and worked to install it 85 ft up in the air on a windy and chilly, early spring day, as the bell needed to function on opening day.

One of the things that the Phillies didn’t have previously was local control. So, if you wanted to see the bell operate, you had to be on the phone for troubleshooting and you had to call to somebody who was at the main control panel of the ballpark, and they would then push the button and the bell would move.

“So, what we did is we built the electrical panel right there on the HPU that’s sitting up in the enclosure on the platform and we put local control on there. So, just by pushing buttons, we can operate the bell so we can be self-sufficient for any troubleshooting and tuning that we want to do,” Turner said. “And so, what we’ve done for them is when they push the button, they get feedback as to what is happening.

“The motor is starting up. The valve is in this position. And if there is no motion, they get told why, and when there is motion, they get told, or the availability is there for them to know basically everything about what the HPU is doing. It gives them faster accessibility to see if they have any problems, which, hopefully, they haven’t yet so far since it’s still mid-season. After removing and refreshing the cylinders, the goal was to be able to automate the ringing of the bell, said Kicera. “Before, in the control room they had to watch when the clapper met the bell and then someone pushed a dong button to make the sound. And obviously that tied into their entertainment control system that they’re using to basically listen for cues,” he said. “There was a number of different profiles that were programmed. The backend control system that they’re using now can speak to the hydraulic power unit’s control and could all be kind of synchronized real time.

“In general, it’s much more robust. The goal obviously was to enhance the reliability so that when they hit go or that cue got triggered it actually was going to work. We have a system that’s considerably more flexible in not only the ability to ramp up and down speed but go to different points within the travel. We’re not limited to the end of travel limits. And just control-wise, the feedback loop gives the folks who are operating the bell and all the various other systems that go along with it good visibility into to what’s happening.”

“It’s one of those things where the bell needs to work. The first at bat was a home run for the Phillies,” Turner concluded. “At the end of the game, they showed the bell swinging and dinging, and the announcer actually said, ‘What a day for the Phillies. And look, the bell, it’s working.

“I think, because  of my passion for hydraulics, that kind of a statement really gets me. Because, hydraulics should work. And, when I see a system that is expected to work and doesn’t because somebody didn’t use the right vendor or it’s not been maintained properly, then, hydraulics gets a bad rap. And it’s not the hydraulics. It’s, generally, somewhere along the line that the best decision for the hydraulic design team was not made.