A sawmill ran a set of six large air-cooled compressors to feed their various processes. To cool the compressors, the air was drawn from outdoors and mixed with indoor air to keep temperatures from freezing the compressors in winter. This facility has a tough environment for cooling air because of the sawdust.

To attempt to keep the compressor coolers clean, the intake air was filtered, but as we can see in Fig. 1, the maintenance of the filters was a bit lacking.  The clogged filters caused a restriction to flow, allowing the compressors to overheat.  The flow reduction caused compressor discharge temperatures of above 120° F, much too hot for the installed air dryer. Every 20 degree increase in air temperature doubles the amount of water vapor an air dryer must process.

Readings were taken that showed specific power (kilowatts per 100 cfm) for this system was running double (or, at times, triple!) the normal level of 20 kW per 100 cfm. This operator was wasting huge amounts of electricity due to this mode of operation. The extra cost was running nearly $250,000 per year! That’s of course far more than it would cost to clean the filters regularly.

Arrangements to do just that have been made and the compressors will be put on an automatic controller so that only three compressors run, the others can remain as active spares. 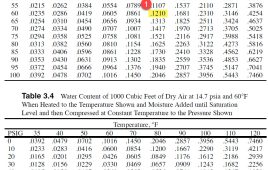