It’s well understood that internal combustion engines require valves for intake of fresh air and discharge of exhaust gases. Today, mechanically driven camshafts are used to control the gas exchange valves of four-stroke engines. They are often equipped with additional mechanisms, some of which are quite complex, that permit modifications to a valve movement pattern by the camshaft. But it increases friction and flexibility is still quite limited. To improve fuel economy and accommodate alternative fuels, engine makers need a new design that offers fast valve movements even at low speeds, adaptable strokes and cylinder-selective variable valve timing. 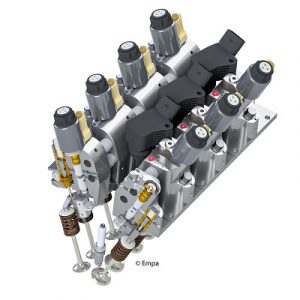 Researchers at Empa, the Swiss Federal Laboratories for Materials Science and Technology, together with hydraulics specialist Wolfgang Schneider, have now developed an innovative, electrohydraulically actuated valve train, termed FlexWork. It enables completely free adjustment of valve stroke and timing, consumes less energy than that of a cam-driven valve train, while at the same time being robust and cost-effective. The design could potentially cut the fuel consumption of spark-engine-driven cars and trucks by 20% according to Empa Media Officer Rainer Klose and Researcher Patrik Soltic. Thus, gasoline engines could near the efficiency of diesel engines. But even the diesel could improve in overall efficiency and in various further aspects like exhaust gas treatment or inclusion of exhaust braking.

“The hydraulic actuator does not come off-the-shelf as a whole,” said Wolfgang Schneider. “However it’s an intelligent composition of bits and pieces of various off-the-shelf valves with comparably small modifications. The idea was to build on single parts of known technology and proven feasibility to present a convincing approach with economic potential.” Power switching of the solenoid is done with common boost electronics while the “brain” — an Empa-programmed test-bench computer — only needs to supply simple on-off signals. Electronic valve lift measurements are only for supervision and adaptation, he said.

Another innovation is the choice of a water-glycol mixture (engine coolant) as the system’s hydraulic fluid, rather than typical oil. Due to its physical properties, this medium is well-suited for fast-switching hydraulic systems, as it is very stiff and therefore creates fewer hydraulic losses. This makes the cylinder head completely oil-free, which can allow for more-economical engine oil with extended change intervals, said Klose.

By selecting the operating parameters, the opening and closing times as well as valve lift for each cylinder can be chosen in a completely unrestricted fashion. This means that each engine operating condition can be varied from cycle to cycle, for example by:
• Intelligent load control
• Selecting the residual gas quantity remaining in the cylinder (exhaust gas recirculation)
• Deactivating unneeded cylinders without the driver noticing.

This makes the engine highly adaptable to new renewable fuels. Oxygen-containing fuels such as methanol or ethanol, for example, allow more residual gas to remain in the cylinder. Natural gas, biogas and syngas generated from wind and solar power offer increased anti-knock properties, and the valve train can react flexibly to this as well. In addition, alternative combustion concepts can also be implemented comparatively easily, such as homogeneous self-ignition: a fuel-air mixture is ignited at the precisely defined moment without ignition sparks by setting the correct conditions towards the end of compression. The mixture combusts with virtually no pollution.

The new valve train was installed in a VW 1.4l TSI passenger-car engine powered by natural gas. The valve train has been running on an Empa engine test bench since October 2018 and has already flawlessly endured many millions of cycles in operation, said Klose.

The system achieves a significantly lower energy requirement over a wide operating range compared to camshaft-driven systems. Together with optimized gas exchange, the fuel consumption of the test spark-ignition engine is about 20% lower than with conventional valve control using a throttle in combination with camshafts in the low-load range typical for passenger cars.

Technology partners in the project include Hydac and Bieri Hydraulik. The FlexWork valve control needs only low-cost components. No expensive, fast-switching valves and no complex sensors are required. Empa is in discussions with engine manufacturers for the transfer of this technology, which is suitable not only for combustion engines but also for compressors.