Researchers at the Technical University (TU) of Munich have developed a new test stand for examining the behavior of concrete bridge beams. To better calculate the load-carrying capacity of these beams in future constructions, six hydraulic cylinders from Liebherr Components, Nussbaumen, Switzerland, are used to press down with full force until the element breaks. The collected data helps in developing new, leaner constructions from ultra-high-performance concrete. Best of all, it could also facilitate the rehabilitation of thousands of existing bridges. 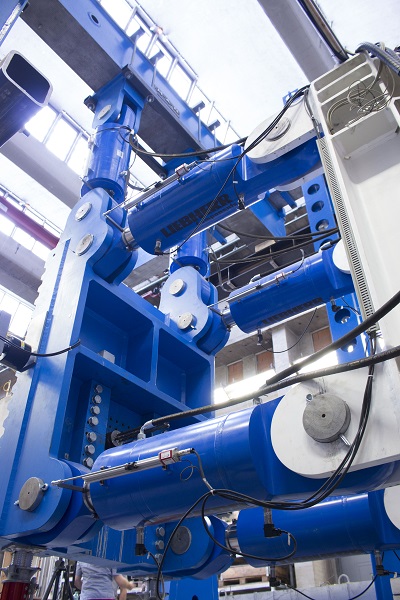 Researchers from the Department of Solid Construction at TU Munich are gaining new insights into the loads, forces and reactions on bridges. To provide a detailed calculation basis for the static behavior of preloaded bridge beams, the extremely heavy constructions must first be tested to failure. This is no easy task for beams measuring 20 m and more in length.

“The mere handling of such concrete beams is complex, not to mention the costs. For this reason, in the past, testing was mostly carried out on reduced-scale models with a cross-section height of 20 to 30 cm. Very little testing is done on realistic section heights,” explained Nicholas Schramm, the research assistant responsible for the construction of the new test facility.

The team, led by Prof. Oliver Fischer, is pursuing a new approach based on what is called the “substructure principle.” Instead of using a complete concrete bridge beam, only the subsections in which the construction is prone to fail are examined, while maintaining the cross-section height. As a result, the dimensions of the test specimens can be reduced by approximately 75%. In the case of a 20-m long bridge beam, this means a section measuring 5 m in length. This method makes manufacturing, transport, handling and disposal easier and, of course, greatly reduces the costs. The goal is to carry out as many tests as possible at a reasonable cost.

To provide the necessary forces, a special test bench is configured to handle a maximum cross-section height of 1.8 m and a width of 1.3 m. It permits a 3.3-MNm load force to be exerted for the maximum bending moment and 3.2 MN for the maximum shear force. Key components are six double-acting hydraulic cylinders, which provide a constantly increasing force.

“Each cylinder provides a maximum compressive force of up to 1.6 MN and a maximum traction force of 1.1 MN, making it particularly efficient for its size,” said Sven Weckwerth, sales manager for hydraulic cylinders at Liebherr. The company annually produces around 50,000 hydraulic cylinders, shock absorbers and hydraulic systems. “For test benches, it is always about meeting individual demands, which requires specific application know-how. Other important factors in the cylinder design are the available installation space, the desired stroke and the requisite power,” he said.

Based on well-defined specifications supplied by TU Munich, Liebherr engineers developed tailor-made cylinders adapted to the specific application needs, based on the design of an existing cylinder, said Weckwerth. The cylinders have a 260-mm bore, 140-mm rod diameter, and nominal operating pressure of 250 bar. Three research projects investigating the shear-load resistance of prestressed bridge beams are currently taking place at the university. One goal is to obtain greater insight into the design of novel beams made out of ultra-high-performance fiber-reinforced concrete.

There is also an acute need to refine the measurement approaches based on design calculations of existing bridges. “For many older bridges from the ’60s and ’70s, we need to adapt the underlying calculation methods and models,” said Schramm. “Designed for the traffic and loads of the day, today they no longer correspond to the increased requirements. We also know, however, that the static calculations in the ’60s were made using simplified approaches, meaning that often there is a lot in reserve, so that the bridges are capable of withstanding far more.”

In many cases, a considerably higher reliable load level can be confirmed through detailed and well-founded retrospective calculation, thereby avoiding expensive demolition and rebuilding, or the costly restoration of the structure, he explained. For this, however, additional realistic data from component testing is necessary. The savings potential is enormous: the federal highways in Germany alone have around 39,000 bridges, representing investment assets of around €45 billion. A large proportion of them are more than 50 years old.

Therefore, at TU Munich, older bridge sections will be replicated and tested in the new test stand. Current tests require shear forces to around 700 kN, corresponding to around 70 tons, and thereby the realistic load of the largest trucks. The sections are 3.5 m long, with a cross-section height of 80 cm, equating to a total beam length of 12 m. For this, four horizontal and two vertical hydraulic cylinders act with constantly increasing force on the test piece until the concrete beam ruptures.

The combination of all six servo-hydraulically controllable cylinders offers great flexibility. The variable control of the dual-action cylinders permits the concrete element to be tested both for bending and shear force, along two axes if required, and for torsion. Cyclic loading and fatigue testing are also possible.

“Our hydraulic cylinders are ideally suited to this, since they can provide constant and precisely adjustable force through to rupture,” said Weckwerth. The test rig includes Liebherr-supplied position transducer systems and strain gages, as well as fiber-optic sensors that are otherwise predominantly used in the automobile industry. These enable the continuous measurement of strain and, therefore, provide data on load and deformation behavior.

Since May, prestressed concrete bridge beams have been examined weekly on the test stand at TU Munich. The acquired data is giving researchers a better understanding of the realistic load-bearing behavior of the beams and improving future design calculations. Sections with cross-section heights of 1.2 m are already being readied. These beams would then have a regular length of around 20 m, which would mean considerable extra expense using traditional testing procedures. Tests are also being carried out on ultra-high-performance, fiber-reinforced concrete. This is three to five times stronger than traditional concrete. Based on the test results, leaner constructions may be possible in the future.