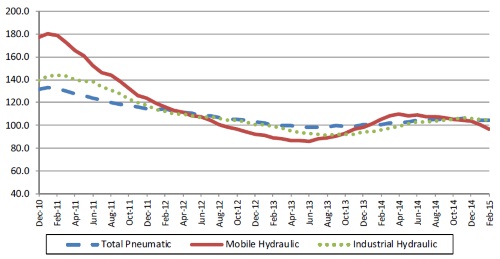 Each point on this graph represents the most recent 12 months of orders compared to the previous 12 months of orders. Each point can be
read as a percentage. For example, 104.7 (the February 2015 level of the industrial hydraulic series) indicates that industrial hydraulic orders
received from March 2014 to February 2015 were 104.7% of the orders received from March 2013 to February 2014. (Base Year 2013 = 100) 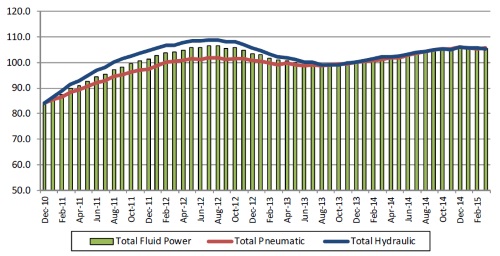 The table above is expressed in terms of cumulative percent changes. These changes refer to the percent difference between the relevantcumulative total for 2015 and the total for the same months in 2014. For example, the February pneumatic shipments figure of ‐4.1 means that for the calendar year through February 2015, pneumatic shipments decreased 4.1% compared to the same time period in 2014. (Base Year 2013 = 100)