Not surprisingly, several mentions were made this week about the need for more skilled fluid power professionals at The National Fluid Power Association’s Industry & Economic Outlook Conference held at The Westin in Wheeling, Ill. 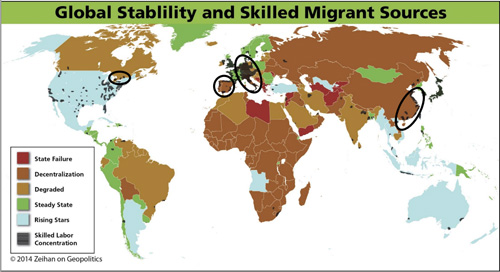 Most of the news was upbeat and positive, with a consensus coming from leading economists that the U.S. and the fluid power industry specifically, were all in the middle of a slow but steady growth period that should continue for the next five years or so at least.

But as he kicked off the conference, NFPA CEO Eric Lanke noted that most fluid power companies say that “an educated workforce is the number one challenge that they face in growing their business and bringing their products to market.”

And several of the economists and analysts echoed these concerns with statements about how wages and talent are a critical area where companies need to focus their efforts. For instance, although companies are seeing record profits, wages are still not rising as much as employees would like them to. This could be a problem for manufactuers, said Alan Beaulieu, President of ITR Economics, as foreign firms are willing to pay 10% more than American companies.

Similarly, Peter Zeihan, geopolitical strategist, said that skilled labor will be the migrant of the future, as these individuals go where the money and innovation are.

To that end, I’m happy to report that organizations like the NFPA Education and Technology Foundation are continuing to work to build a skilled, technically trained workforce. To hone its focus on education, research and innovation, the NFPA has added a new staff position to grow its Fluid Power Challenge program. Lanke said that the program more than doubled last year and he expects it to double again this year, with more middle school students learning the basics of fluid power technology and actually using fluid power to build a machine to do work.

In addition, the NFPA has added six new technical schools to the NFPA membership, and just granted four two-year colleges money for fluid power labs. And finally, the organization recognized its initial Pascal Society members, which was formed to support research with organizations such as the Center for Compact & Efficient Fluid Power.

I am proud to work for a supporting member of this organization, as education and research are the wave of the future of this industry. And with continued focus on technological education, an industry that is already powerful will continue to grow in only the best ways.