Electrohydraulic drives are still largely connected via analog interfaces and centralized closed control loops, but strides are being made to develop future-looking technologies that integrate easily into IoT and Industry 4.0 requirements. To compensate for the inherent differences of hydraulic drive technology and, at the same time, significantly enhance its performance and diagnostics capability, Bosch Rexroth has developed a consistent automation platform that can be configured for both centralized and decentralized systems.

This article first gives an overview over what’s already available and how it relates to the automation world. Second, we’ll delve into decentralized drives in greater detail, explain their benefits, and present some notable applications. Current developments and target goals can be characterized by the following starting points: Demands on the target system
In developing future-looking Industry 4.0 type systems, requirements can be subdivided into the following three areas:

Thanks to PC-supported programming and Bosch Rexroth’s IndraWorks (IW) parameterization tool, which can be used equally for electric and hydraulic drives, engineers can consistently meet these requirements. Consequently, electric and hydraulic drive technologies are treated identically. Dialogs in IW tailored specifically to the individual devices take into account special characteristics of drives and simplify commissioning.

To provide additional details, here’s a closer look at the components and subsystems in IAC drives. The components available for this can be classified into the following subsystems:

In terms of hardware, robust IP65 electronics is available in the IFB and IAC. Both are equipped with interfaces for up to four pressure sensors (either current or voltage signal range). In the IAC, interfaces for position measuring systems (SSI) and incremental interfaces (1 Vpp) are also available. For communications, an integrated multi-Ethernet interface permits connection to one of the following bus systems:

In other words, every component “speaks” six languages. Hardware variations due to different bus systems can thus be avoided. This is also interesting for users needing to run different central controls because of their customers’ demands. The selected bus system is activated via the software.

Safety is also an important consideration. Capabilities such as “Safe Halt,“ “Safe Direction“ and “Central Position Monitoring“ run independently of the bus system via two certified digital inputs and two associated digital output signals. With regard to the valves, they provide safe shutdown of the output stages for the solenoid. This approach permits safety functions without having to design the entire bus system, master included, as a safe system. 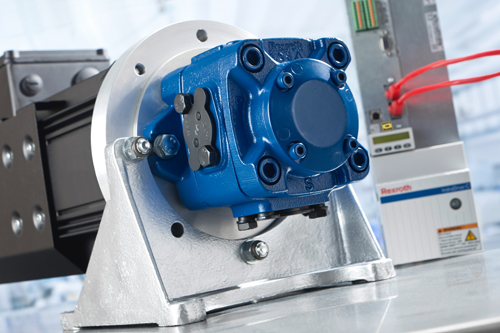 The Rexroth Sytronix SVP 7010 is a variable-speed pump drive that offers high accuracy and dynamic performance with low energy consumption.

Software functions of the OBE for valve-controlled drives (comparable functions are available for control pumps) include various bus systems, as described above. Other considerations are:

Other considerations include diagnostics and commissioning aids. Apart from analysis tools such as a software oscilloscope and error log, the system provides wizards for the pre-calculation of control parameters, as well as automatic optimization tools for axis controllers in continuous path-control modes. Future software versions will offer condition-monitoring functions.

Finally, the system has an integrated PLC. It lets the customer program functions such as adjusting the controller to suit individual applications, special motion profiles or application-specific reactions to errors. Here, the customer can flexibly integrate its know-how and protect it accordingly.

Application examples
This drive structure suggests itself particularly for applications in which:

A further criterion using IAC can be when controlling a large number of axes. The decentralized control approach relieves the central control of most tasks and, in addition, cabling efforts can be drastically reduced.

For example, IAC is commonly used in injection-molding machines for motion and force control. Optimized digital closed-loop control of the injection process ensures tight precision, say over pressure, speed and force when closing and clamping the mold. That’s because the transition from velocity to pressure control of clamping—with high accuracy—is essential to maintaining dimensional stability of the injected part as well as the mechanical integrity of the machine. It also reduces cycle times while improving the machine’s energy efficiency.

Differential force control permits the application of only the required forces, helping protect the mold without compromising speed. And as noted previously, hydraulic drives with on-board electronics can improve safety on machines such as these. One obvious reason is to protect workers during clamping actions. But also, if a part does not cleanly release and remains in the mold, the electrohydraulic control system senses a malfunction, stops movement and prevents damage to the machine.

Another application example involves automating axes in a sawmill. In this case, the need for a large number of self-contained axes and sizeable physical distances between them were decisive for choosing a decentralized drive structure. EtherNet/IP was used as the bus system to communicate as needed with higher-level controls. The system, which has run in a three-shift operation for more than a year under harsh operating conditions, shows the robustness and reliability of the electrohydraulic system.

Finally, consider a highly complex rotary-indexing machine. The demands on the drive axes and the entire automation system are extremely exacting with up to 48 interpolating electrohydraulic axes plus electric servodrives. Requirements for continuous path and positioning accuracies are on the order of a few microns. The CNC technology used for the axes must handle up to 28 NC channels. Here, the IACs operate in conjunction with an MTX control and a Sercos bus system. The result is a 20% increase in productivity compared with previous versions of the machine. At the same time, lower cabling and commissioning costs as well as optimized CNC performance reduced overall system costs. The machines work trouble-free around the clock.

The efficiency of electrohydraulic drives and not least their full and “easy” ability to integrate into automation systems are, apart from the cost, essential competitive criteria that speak in favor of this drive technology. The concepts presented here are characterized by consistency in terms of automation. The key aspects are:

Whether central or decentralized axis control is the better choice depends on the specific application. Regardless, such concepts make hydraulic drive technology “Industry 4.0” ready, while maintaining its competitiveness as physically compact, robust and capable of high speeds and large forces.