Pressure losses in pneumatic systems can be costly and affect machine efficiency. The new Aventics PE5 pressure sensor from Emerson measures systems losses and will alert when the leakage rate exceeds a pre-determined value. This enables excessive leaks to be diagnosed early and addressed, before they become a major issue. The sensor has two digital […] Emerson has introduced a new tool to help pneumatic system users quickly and easily see the potential benefits of integrating IIoT. By connecting the new Aventics Smart Pneumatics Analyzer to the compressed air supply on an existing machine, users will have instant analysis options for key machine characteristics such as compressed air consumption and possible […] For Aventics, digitalization presents a major opportunity to create added value for partners and customers. For this reason, the pneumatics specialist has bundled its offerings into one convenient website. From configuration programs, to product information, to the energy savings calculator — the Aventics Online World offers a comprehensive range of practical pneumatics applications and expertise. […] The intelligent use of an electropneumatic pressure regulator depends on the kind of application and the actual tasks involved. With a flow of 6500 lpm, the new EV12 pressure regulator from Aventics can be used as a standalone product, in the AS3 device series, or as a battery for block assembly. Pressure regulation tasks are […] Safety is always the number one priority for industrial manufacturers. With its new safety valve, Aventics has expanded its range of products in this area. Users can integrate it modularly into AS series maintenance units or position it flexibly as a stand-alone product. The company’s new S3-SV exhaust valve ensures reliable, standardized safety for both personnel […] The sub-base mounted EV03 electropneumatic (E/P) pressure regulating valve from Aventics features extremely low energy consumption and can guarantee pressure control during a power loss. Depending on the version, maximum power generation is between 160 to 220 mA. The EV03 also offers precision, with hysteresis as low as 0.7 psi, and flow up to 0.88 […] This webinar was presented live on Wednesday, October 10, 2018. Click below to watch it on demand.     There are a few common mistakes many people make when buying and operating air compressors.  These errors can affect the performance of the system by causing increased waste, higher operating costs and poor pressure stability.  This… Food-safe pneumatics automates traditional cheese production. Contributed by Bill Oliver, Sector Head Food & Beverage/Industrial Automation and John Bridges, Head of Marketing, AVENTICS Corp. Most everyone who enjoys a good bowl of pasta is familiar with Parmigiano-Reggiano and Grana Padano, the well-known Italian cheese varieties famous around the world. These types of parmesan cheese have […] At this year’s Hannover Messe, the bright red suitcase was the exhibit that attracted the most attention at the Aventics stand. “Everyone is talking about the Industrial Internet of Things, or IIoT — lots of companies are looking to take advantage of it,” said Andreas Kliewe, Manager Application & Specification at Aventics. But when it […] For outstanding digital competence, Aventics Hungary has been honored in the newly established and prestigious industry 4.0 category of the “Factory of the Year” contest. The pneumatics specialist has been named “Hungary’s Best Prepared Industry 4.0 Plant.” In the previous year, Aventics Hungary already won three categories in the “Factory of the Year” contest: “Best […] Pneumatics specialist Aventics and its team will once again compete at one of the world’s greatest international company sports events. 87 associates will join 5,500 competitors from 150 companies facing off at the sixth annual Corporate Games in Annecy, France, from June 31-July 1, 2018. “Company sports not only promote employee health, they also foster […]

Emerson, headquartered in St. Louis, still has pneumatics on its mind. After purchasing ASCO in 1985, it bought Joucomatic a few years later and added it to the ASCO family. Later, in 2008, Emerson acquired Numatics—and combined the two as the ASCO Numatics division of the company. Now Emerson, the global technology and engineering company, is on […] What was once just a vision of the future has become reality in many industries: using 3D printing for series production. Aventics is now taking advantage of additive manufacturing in short runs. A company from the beauty industry was looking for a unique solution for an application in compression therapy. “Our focus wasn’t on large […] 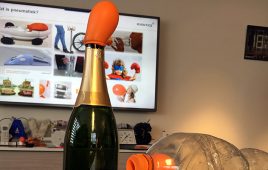 This spring, Aventics will again sponsor several campaigns aimed at getting young people interested in technology. By participating in “Girls Day” and “Future Day,” the pneumatics specialist hopes to draw the interest of children and youth in compressed air as a technology. On April 12, 2018, Aventics welcomed ten participants to its Girls Day in […]

A new 16-page brochure titled “Integrated Solutions for Life Sciences” is available from Aventics. The company’s pneumatic products and technology can be found in all areas of life sciences. They prepare and distribute air, oxygen and medical gases in hospitals, and supply patients with oxygen through mobile oxygen concentrators. Pneumatic components make shock wave therapy […] Right from the start, simple handling was one of the most important features of the AV valve system series. Pneumatics specialists from Aventics have taken this approach one step further and now have a new solution to showcase at the Hannover Messe 2018. With outlets on the bottom, the AV system is optimized for installation […] To date, Aventics customers in Switzerland, Canada and the U.S. have been able to access the new portal. However, by the end of 2018, the Pneumatics Shop will be available for the entire Aventics world. The real challenge for the company was projecting habits of online users from the B2C market in a B2B shop.… New CCL-IC series of compact pneumatic ISO cylinders from Aventics feature a hygienic design, making them suited for applications with limited installation space combined with stringent hygiene requirements, such as in food and beverage operations. With nine bore sizes, the CCL-IC cylinders reportedly cover the broadest range of hygienically designed cylinders on the market. Bore […]

Aventics aims to simplify configuration and ordering processes for complete pneumatics solutions through digitalization. All its tools are available free of charge online, from configuration programs to product information, CAD data and calculation tools, up to the energy savings calculator. Engineers and buyers can use its “CylinderFinder” to simplify selection of the right cylinder for their […] Aventics is now offering its customers in the United States an innovative service and product portal. Available at http://www.pneumatics-shop.us, the portal helps to quickly and easily find information on components and solutions tailored to the requirements of engineers and purchasers. At the same time, the portal’s lean structures and processes speed up online order processes. […]